Do you ever have a day that is determined to bring you down? Did it feel like everything you tried to do, was rebuffed by sudden and strange events that all seemed to happen coincidentally on the same day? I know I sure did, and no matter my determination to move forward and not let my smile turn upside down - it felt like the world was against me. 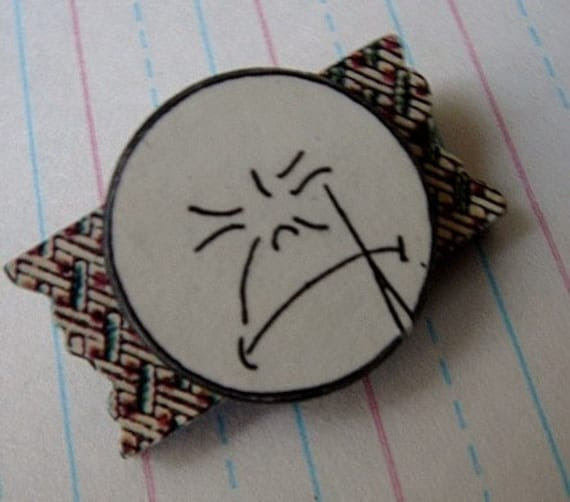 "A Sad Little One Pinback Badge" by Irobinson

Yesterday felt like 'mission impossible' just to get on through the day peacefully and unscathed. It started with much drama. It was like a  Play with terrible acting with a Director who didn't ensure the facts were correct. Regardless, you pretend that you have bought the entire story they try to sell you, and perhaps during that drama episode you might have just lost your head and completely by accident too! 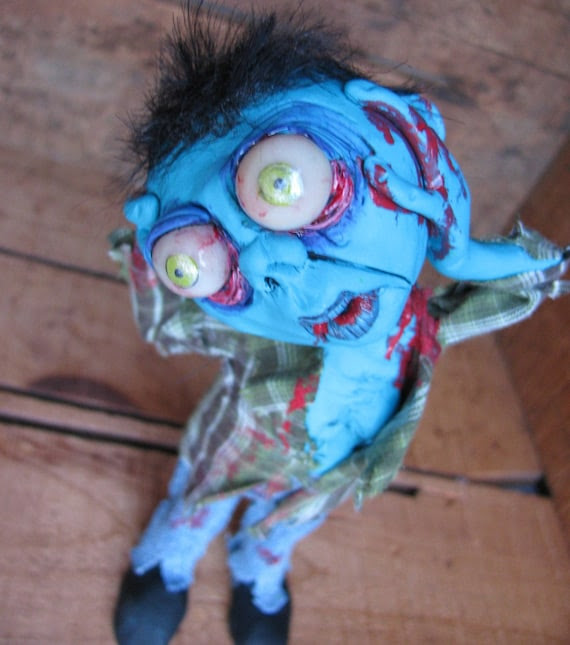 "Duke Evan and Friend" by MealyMonster
Despite the terrible acting, it may have received one thumb up for moving the audience to tears!
Tears of frustration to be precise!
However I had to move on. I went out on the town to erase that bad drama from my head. I was verbally pushed out of the door for my 'better health', but I had some reservations on whether or not I should go. It wasn't a sunny day...in fact it had been raining for 3 days and the sky was dark and gloomy threatening to rain more on us over-saturated folks.
The weather was down right depressing. 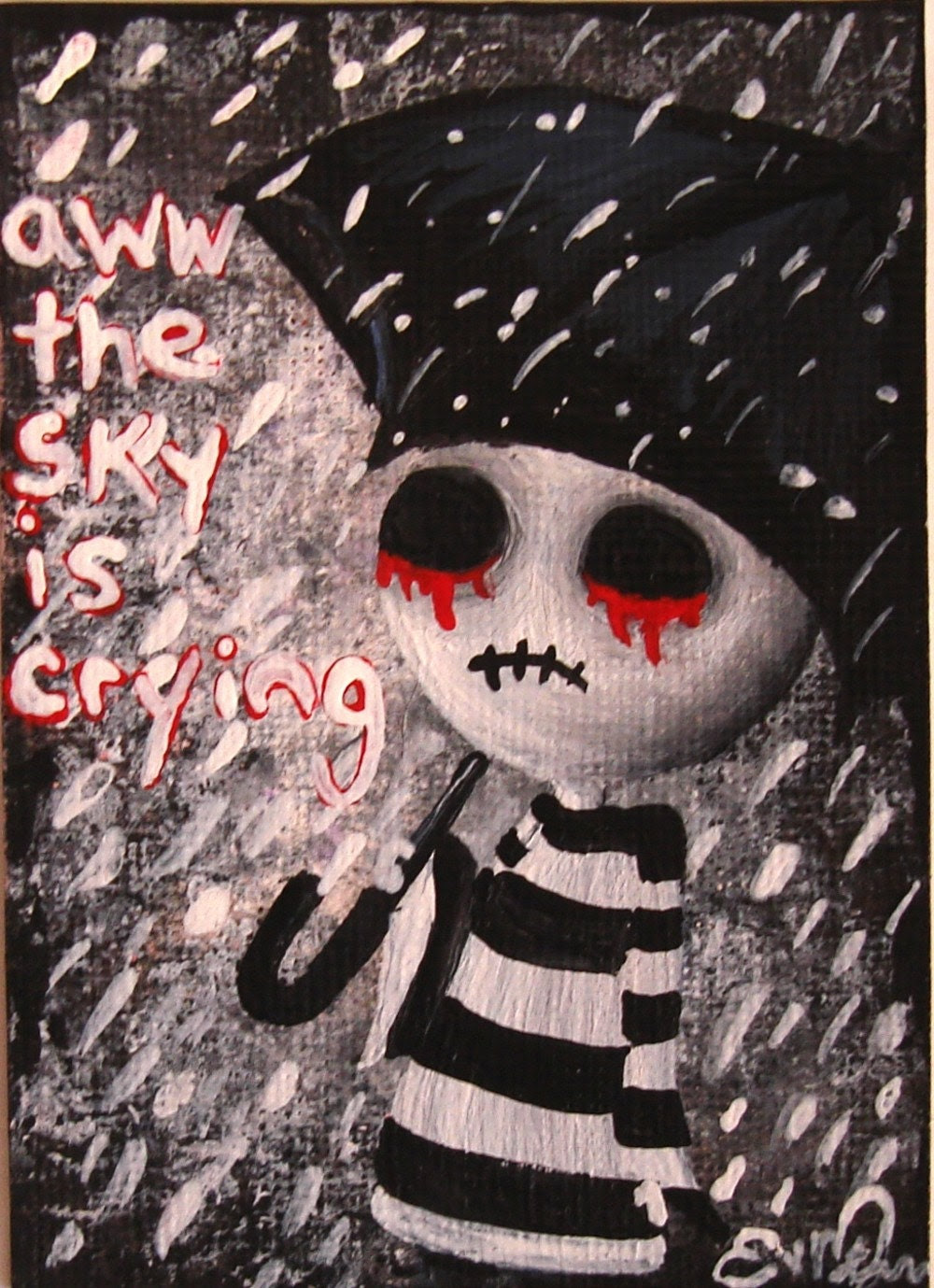 "Big Juicy Tears of Blood and Pain No.3" By Oddball Art Co
But I am a big girl at 5'1 and decided to go out anyways. After all, I needed to make an important run to my supply shop and work on a custom Bridal necklace. I wasn't about to let a little rain or drama stand in my way. It was going to take much more than that.
Well the day started out bad, and I should have taken the hint, but apparently I did not.

The first bus I hop into seems fine and I get myself a comfy seat and relax to some amazing music by Tarja Turunen. As we come to the first of two bus terminals, several bus operators suddenly decide to congregate outside of the bus around the tires for some tea I assume. They stand and chat some lovely conversation while we sit inside and twiddle our thumbs.

Next thing I know, I can smell this strange smell... 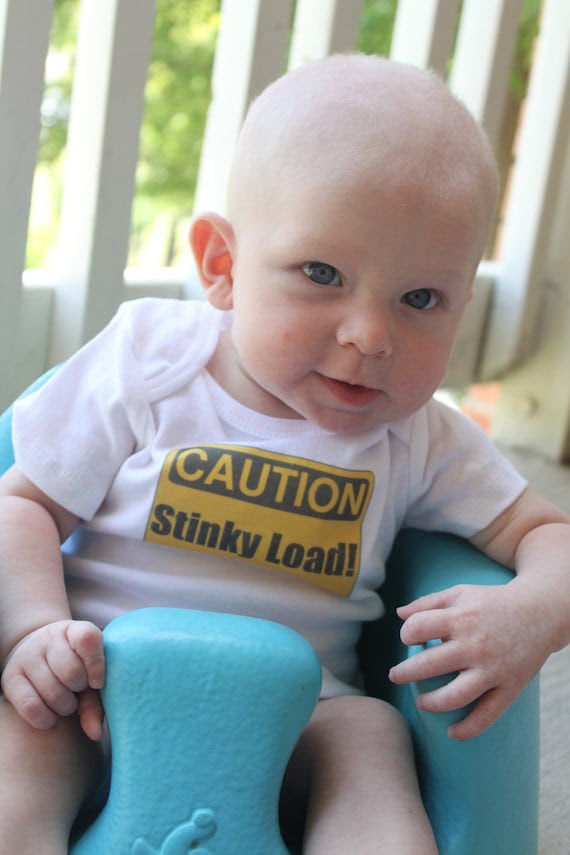 "Caution Stinky Load" - Baby Onesie By Sassysamz
Then I realize its gas and its all through the bus.

Everyone is being quickly ushered off the bus and onto an itty bitty bus to the city.

I normally wouldn't mind but the new bus can only hold half the people on the previous bus, and so we are squished like pickles in a jar.

Here I am thinking 'man this is turning into quite a day', but is it over yet? Of course not! :P

The subway ride home ended up being eventful too. Apparently the first car of the train I was riding was malfunctioning and so the conductor was trying to evacuate the first car. Funny enough I think I was riding in the same train earlier, and I was sitting in the first car. I noticed as we came to Union station that the car was 'grinding' on the tracks which as never happened before. It felt like it was coming off the track in fact, which made everyone a bit nervous.

Wow, a second evacuation. How ironic.

But it gets better. The night isn't over yet. Far far far from it!

The bus ride home was more relaxing. All up until we reach the terminal where the bus briefly pauses. The driver announces she is having technical difficulties...and guess what?

We have to evacuate the bus!

My legs are throbbing in pain, and the world today obviously hates me and makes me want to do this- 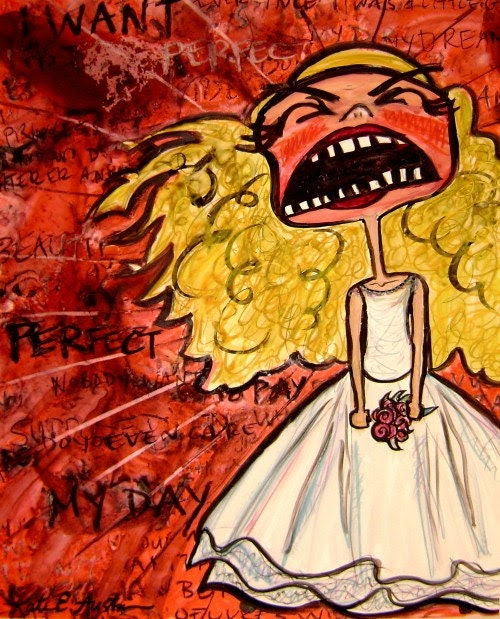 "Perfect Print" By Aephemera
How can all of that possibly come to be? How is it that multiple times in one day similar events occur at different times in different areas and to the same person? Am I stuck in the Matrix and the Matrix is repeating itself? Should I be trying to find some blue and red pills? Hopefully I remember which one I shouldn't take because I really don't feel like having my eyes burned out (if you never watched the Matrix, Neo gets his eyes burned and scared over at the end of the last movie- spoiler).

I know you can't believe me as you read this! How can it be possible?

Posted by Melissa Arnold at 7:49 AM 2 comments:

Sometimes it feels like there is a cyclone in my house, and you often think that life just can't get anymore crazy.  I often wonder to myself how I get anything done. It doesn't help that I have ADD. When I am struck with a thought or an idea or I spontaneously remember something that I'm supposed to do - I end up flying around the room from one project or chore to the next. "Don't Hide the Madness" Print by Thebigharumph
I never clean in the evening. When dinner is done, I'm done. I'm on strike for the rest of the evening and I wont lift a finger till morning.
However I was hit with the cleaning bug yesterday evening and suddenly I'm whirling around the house from the bathroom to the kitchen. Working hard at the bathroom, I have to stop to grab a J-cloth to clean the sink.   Somehow on my mission to find a J-cloth I ended up doing the dishes before I remembered what it was I was looking for in the kitchen in first place. 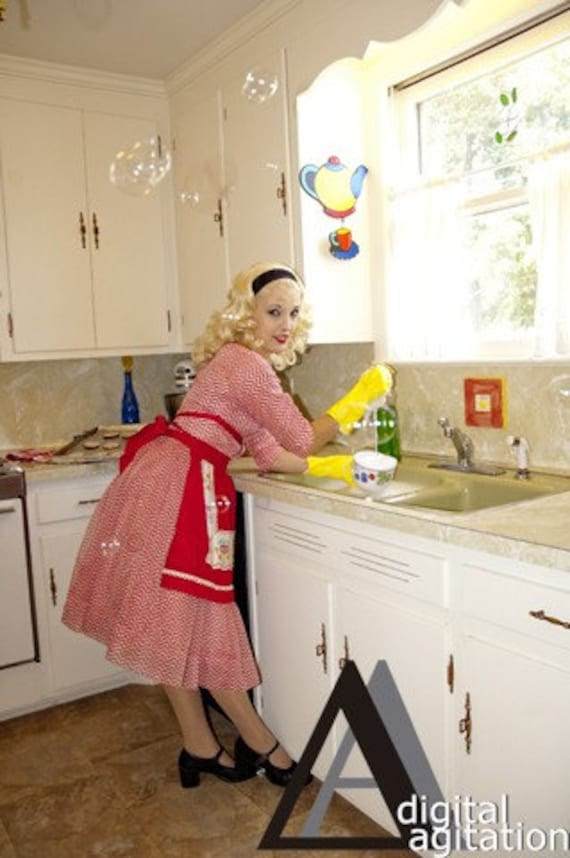 "Cleaning up Pin Up" by DigitalAgitation
Next thing you know, the kitchen is clean, but the bathroom is half clean. So I go get myself a bucket and start washing the bathroom floor - but OH WAIT, I forgot to scrub the toilet first. I can't do that while the floors are wet, and where is that J-cloth? 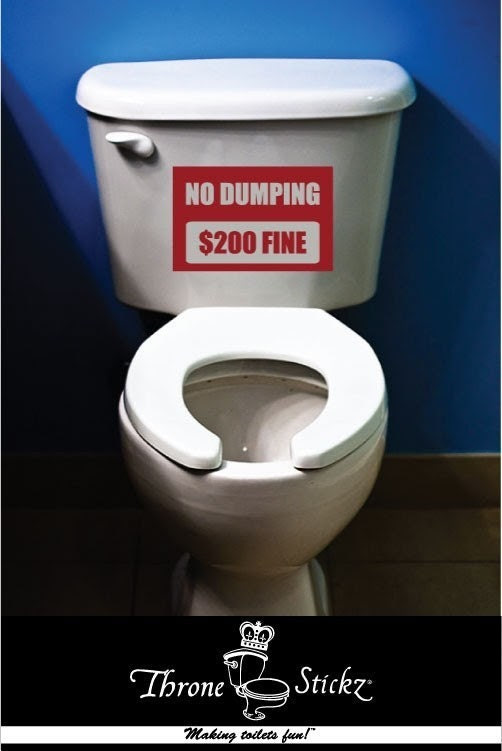 "No Dumping Decal Sticker" By Wallstickz
This cleaning frenzy came out of nowhere. Does this ever happen to you at odd hours? Of course once I'm all done I wonder why I'm so tired. Perhaps if I wasn't so easily distracted, I might finish chores much faster, or leave jobs half done.

And why do I do this besides the fact that I was born from the womb with a bucket and a duster in hand? 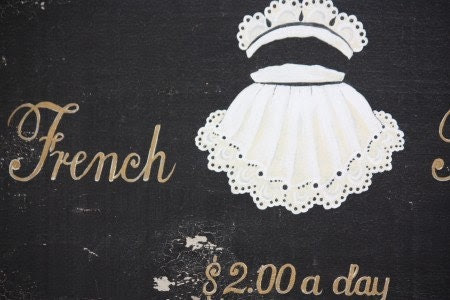 "French Maid 2 dollars a day sign" By chasegirl
Because I gotta get paid!

Now I bet you wonder how I ever get anything done!
Posted by Melissa Arnold at 5:57 PM 2 comments:

Following with my new collection of Jewelry called 'Victorian Romance', here is a gorgeous Treasury I made (So that the FRL Team wont kick me out) following the theme of Victorian Royalty...and what better than dreaming of being a Princess?

Posted by Melissa Arnold at 7:45 AM No comments:

Email ThisBlogThis!Share to TwitterShare to FacebookShare to Pinterest
Labels: treasury

I loove Flowers, but I dread the rain that it takes in order to give us that rich green grass, and blooming trees, and the lovely tulips that only come out for one short season.

Each year I get excited to plant, and garden...but I haven't had the time in the past two years to do so, and the one year - it was too hot for them.

Hopefully this year, we'll have it right. We are finally turning the patio from storage room into a sun room - soo excited!

Of course we will fill it with plants, decorations, and FLOWERS!!

On top of my love for flowers, I've always enjoyed making pretty, colorful jewelry such as my wire weave necklaces which occasionally found flowers intertwined on them.

Now I have floral earrings and bracelet (soon to be many), made with my favorite era of all time - the Victorian Age. It has been so much fun to mae them, and as I do so I begin to create different designs with them.

Being that it is Spring, here are some lovely and ornate pieces made with floral designs and Lucite flowers!! 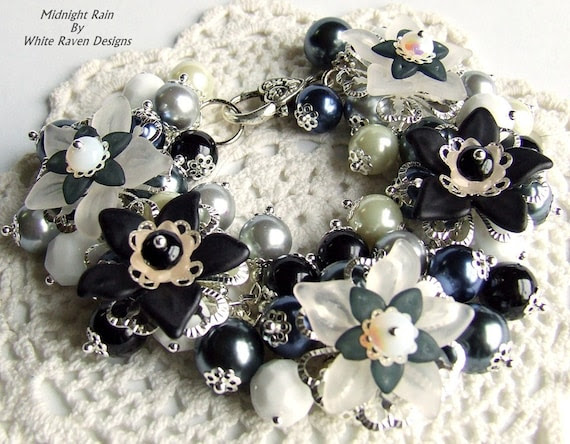 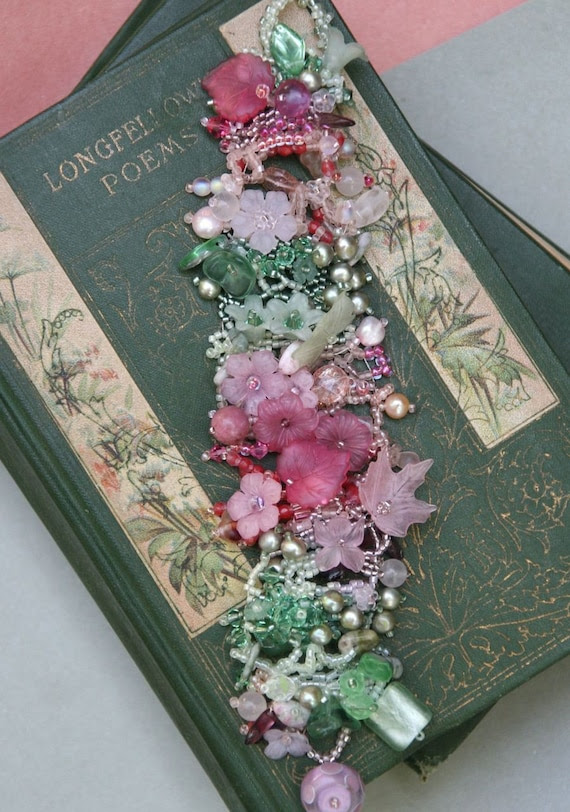 Glamour in Dark Gray and Silver
By: Solbijou 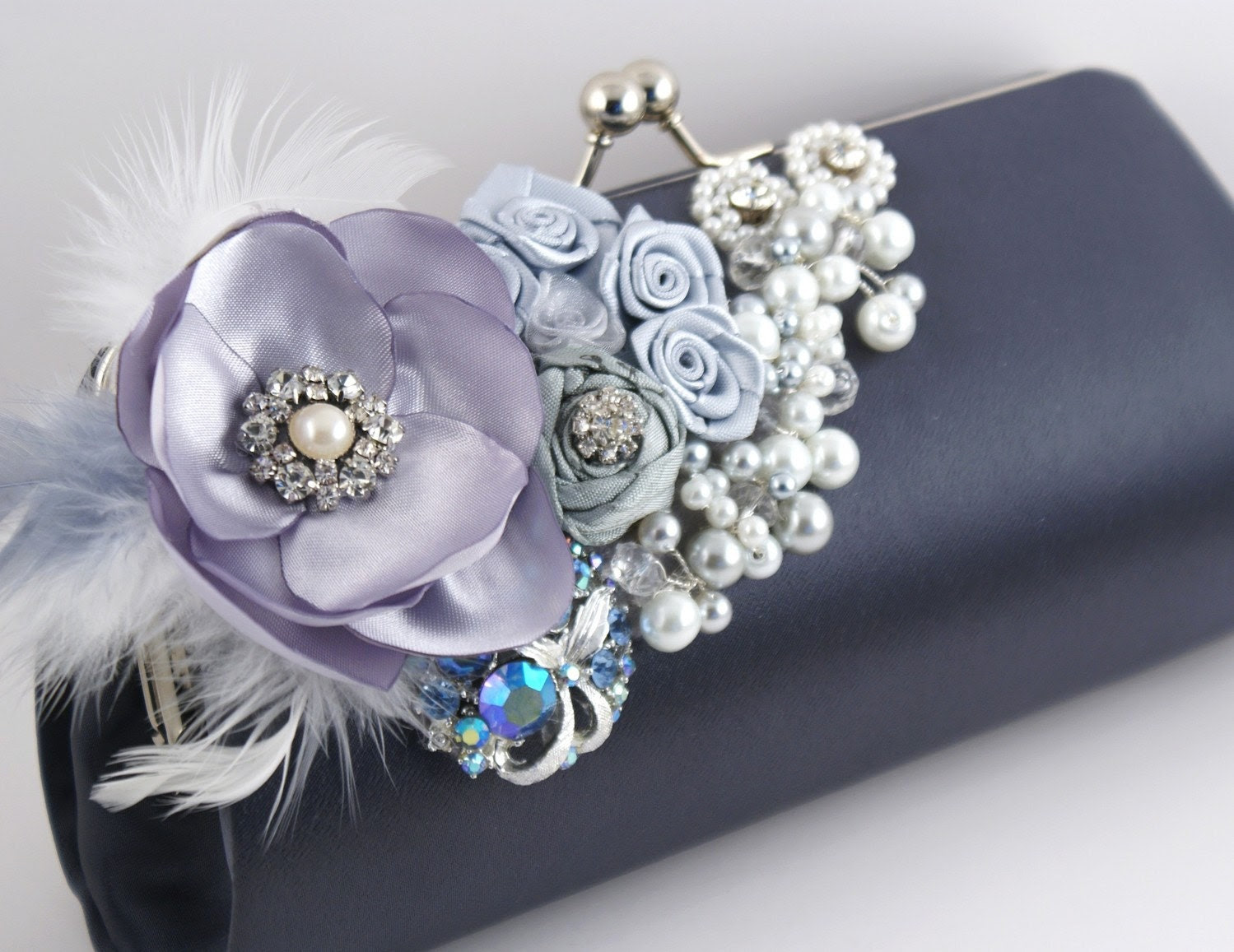 That's today's edition of floral designs! I hope you stop by their Shops and see the rest of their lovely artistic pieces! =)
Posted by Melissa Arnold at 7:26 AM 5 comments: